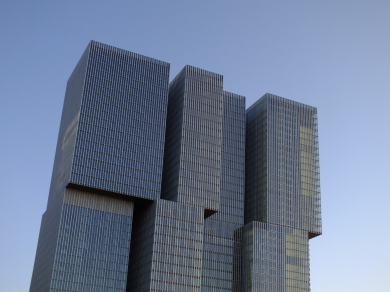 Within the Netherlands, the city of Rotterdam is well known for its skyline: a jagged row of modern towers which spreads away from the River Maas like a bar graph. Locals are probably overdoing it when they refer to the city as “Manhattan on the Maas”, given that the soggy ground limits most towers to about twenty storeys, but many of the buildings are undeniably impressive. Bombed heavily during the Second World War, Rotterdam has since become a showcase for the bold style of modern Dutch architecture in which a building isn’t a building if it doesn’t have at least one wildly sloping face or precarious overhang. Architecture students come from across Europe to visit the Rubik’s-shaped Cube Houses, harbourside Hotel New York and knife-like train station.

The latest example of this style opened recently on the south bank of the river: a set of three glassy towers which loom high over the Erasmusbrug (Erasmus Bridge) connecting the northern and southern halves of the city. The towers were designed by star architect and local boy Rem Koolhaas, whose skills in designing buildings clearly don’t extend to naming them – after some debate, developers agreed the towers should jointly be known as ‘De Rotterdam’ (‘The Rotterdam’).

I found myself in the area a couple of weeks ago and snuck inside for a look around. From the lobby, the buildings were undeniably impressive, with all the features one would expect of a world-class office building and luxury hotel: an upmarket coffee bar, beautiful blonde receptionists, sweeping panoramas of the traffic on the river, and a collection of comfortable furniture which probably cost more than my house. However, when I snuck up to the upper floors, I was surprised to find that most of them were empty, with bare concrete floors littered with dangling wires, tools and paintbrushes. There were few people around and most of the offices and parking spaces were unoccupied. According to news reports, Koolhaas designed the towers long ago but was able to secure funding only after the economic crisis hit, when the cost of land fell and builders’ wages plummeted. It now seemed that the same weak economy which had enabled the project to begin might ultimately doom it to failure.

The Netherlands was hit hard by the global economic downturn. The collapse of Britain’s Royal Bank of Scotland Group was triggered partly by the failings of its Dutch subsidiary, ABN Amro, and the Dutch government was forced to provide a costly bailout. The economy went into recession, unemployment hit eight percent and the price of the country’s slender old town houses fell sharply. Several years later, the Dutch economy is still looking pretty bruised, with many people out of work and the government running a fearsome budget deficit. With natural gas forming a significant slice of Dutch export earnings, the situation has been exacerbated by plummeting energy prices, while Dutch hopes of a special ‘year of trade with Russia’ ended abruptly last year when Russian-backed forces first invaded Crimea, and then shot down a Malaysian Airlines flight with hundreds of Dutch people on board.

The centre-right governing coalition responded to the slump in much the same way as their British counterparts: with billions of euros in spending cuts, sharp tax rises and reform of the complex welfare system. For people who had long been accustomed to receiving generous government support and enjoying a high quality of life, it’s been a bumpy ride. Recently there have been some welcome signs of a turnaround – after two years of contraction, the Dutch economy grew 0.8 percent in 2014. A falling euro has helped boost exports, and most analysts are predicting higher growth over the next two years. However, it remains to be seen whether the country can recover its former prosperity, or whether the Dutch, like others in Europe, will have to adjust to permanently lower standards of living. At the very least, it looks likely that a system which once heavily subsidised the lifestyles of part-time workers and parents will become far less benevolent, making the Netherlands less like Scandinavia and more like Britain or the United States. The underlying fundamentals of the economy seem to be improving, but like the new skyscrapers in Rotterdam, that could turn out to be a mirage. 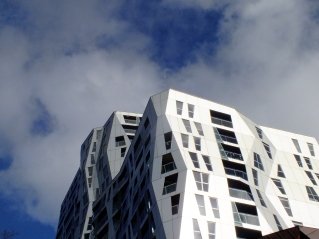