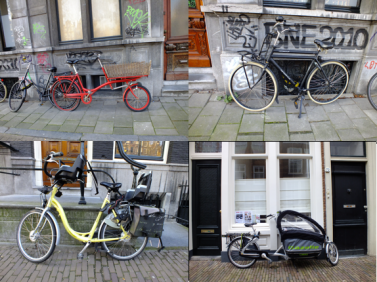 Exactly fifty years ago this week, a young Dutchman called Luud Schimmelpennink went for a ride on his bike. Leaving his apartment in Amsterdam, he cycled through the winding brick streets to Spui square; a cobbled plaza nestled amid the city’s concentric canals, lined with pretty bookshops and cafés. Arriving at the centre of the square, he parked his bicycle next to a statue: a bronze of a cheerful young boy in shorts and cap, with his hands on his hips, gazing out across the tram tracks and cycle lanes. A small crowd gathered. The statue had been donated to the city by a tobacco company a few years earlier, and had by the mid-1960s become regular meeting place for members of the anarchist group known as the Provos, a playful-but-radical bunch of hippies and rebels who would soon become famous when they disrupted a Dutch Royal Wedding with smoke-bombs and were rumoured to have put LSD in Amsterdam’s water supply.

Producing a can of paint from a bag, Schimmelpennink began messily painting his bike white. The repainted bicycle, Schimmelpennink announced to the crowd, was no longer his – it belonged to everyone. Along with two others, it would be left unlocked for anyone to use, free of charge – the embodiment of the democratic, egalitarian society which the Provos hoped to create. The White Bicycles would, Schimmelpennink hoped, spark a revolution in the way Amsterdammers got around.

For a Dutchman, a bicycle was a natural choice of political symbol. Cycling had always been hugely popular in the Netherlands, largely as a result of the flat terrain and compact dimensions of most cities. Doctors, lawyers, schoolchildren, Queens and Prime Ministers all traveled to work by bike. The devastation of the Second World War dealt a serious blow to the Dutch cycling tradition, but following the war hundreds of new bike lanes helped get the country back on two wheels, even if many Dutch never entirely forgave their German neighbours for the wartime theft of thousands of bicycles. “Mijn fiets terug!” (Give me my bike back!) would remain a common, if rather outdated, joke hollered by drunken Dutchmen at visiting German tourists.

In that context, it was hardly surprising that Luud Schimmelpennink’s White Bicycle Plan soon captured the public imagination. Ceremonies were held at the Spui statue at which people would donate more bikes to the scheme, dancing and setting off fireworks while the police struggled to keep crowds under control. Honeymooning in Amsterdam, John Lennon was given a white bike as a wedding gift. Schimmelpennink won a seat on Amsterdam’s city council, and the Provos received acres of press coverage, although a mooted ‘White Wives’ wife-swapping scheme proved rather less popular than the bicycles.

Ultimately, the White Bicycle Plan fizzled out in the Netherlands, thanks to a determined police operation which confiscated unlocked white bicycles throughout the city. The Provo movement itself disbanded in 1967 and, in the way of ageing revolutionaries worldwide, most of its former adherents ended up living the kind of settled, bourgeois lives they had once scorned. Luud Schimmelpennink, however, did end up sparking a revolution.

Some thirty years after his original protest, activists in Oregon who heard about the White Bicycles were inspired to start their own bike-sharing scheme in the city of Portland. Despite bearing a rather unoriginal name– the Yellow Bike Scheme – the Portland project thrived, and provided the inspiration for others in North America and Europe. As technology improved, public-bike sharing programmes sprang up in dozens of major cities around the world. Fifty years on from the first paint-splattered protest, some 700 cities from Dubai to Hawaii now have bike-sharing schemes, with more than 800,000 bicycles up for loan, including 90,000 under one Chinese scheme alone. In an era of widespread cuts to public spending, bike-sharing schemes are a rare example of a public service which is growing almost exponentially, in communist and capitalist municipalities alike. In London, Mayor Boris Johnson has even managed the neat trick of positioning himself as a standard-bearer of the political right while also claiming credit for a communal property-sharing scheme thought up by a free-loving Dutch beatnik. This year, two more new schemes have already been launched, in Belfast and New Delhi. In both cities, the bicycles available for loan are painted white.

One thought on “Revolution in Amsterdam: How one Dutch rebel brought bicycles to the world”