Anyone who wants to travel through time should consider a visit to South Africa. Arriving in Johannesburg after a spell in Malawi, I felt that a two-hour flight had transported me through perhaps a hundred years in time; from a place where oxen hauled wooden carts over bumpy lanes to a glittering future where lawyers watched films on their iPads while taking high-speed trains to work. Like Marty McFly staring at hoverboards and adverts for ‘Jaws 19’, I stood gaping at the electronic displays at the airport, ten-lane motorways, fast-food restaurants, 3D cinemas, and shining shopping malls selling everything from sunglasses to sushi.

Compared with most of its neighbours, Johannesburg often feels more like an American or European city than an African one; a high-rise modern metropolis in a continent where cities are usually chaotic and low-rise. In suburbs like Melville, where bearded hipsters and tattooed blondes flirt over craft beer and stone-baked pizza, one could almost be in Brooklyn or Berlin. Statistically, too, South Africa is closer to Europe than to many of its neighbours, with income per capita nearly ten times that of Mozambique or Zimbabwe. The average Malawian has to work for nearly a month to earn as much as a South African does in a day.

Of course, this prosperity is partly an illusion. Impressive national income statistics conceal the fact that more than two decades after the end of apartheid, a fifth of South Africans live in what economists drily refer to as “extreme poverty”, and nearly half in “moderate poverty”. In Johannesburg, townships like Soweto have developed rapidly but others, like Alexandra, remain little more than slums, with thousands of leaky shacks crammed around open sewers. Even in prosperous Braamfontein, I saw homeless blacks and whites standing shoulder-to-shoulder to forage in the bins outside a trendy food market. Gold and diamond mines still ring the city; and an archipelago of prosperous suburbs and shopping malls is surrounded by a sea of poverty.

Just as troubling to the occasional visitor is something less tangible: the uneasy sense that the hopeful optimism which characterised South Africa in the 1990s has been replaced by something darker. The roots of the problem are partly political. For all the talk of post-apartheid ‘Rainbow Democracy’, the dominance of the ruling African National Congress (ANC) has never been challenged, despite the often woeful performance of Nelson Mandela’s successors. ANC governments have delivered modest economic growth, but also bungled some of the biggest challenges they’ve faced; peddling dangerou 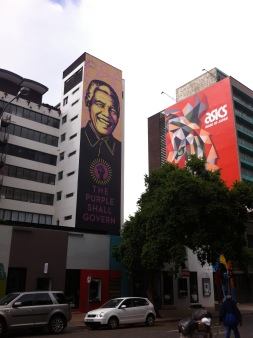 s myths about HIV/AIDS and supporting the tyrannical reign of Robert Mugabe in neighbouring Zimbabwe. Many black South Africans have climbed their way into the middle classes, but many more have been failed by leaders who preach socialist values while acquiring vast personal fortunes. Johannesburgers express dismay at the ANC’s performance but the party still holds a trump card: having brought about the liberation of the country, the ANC has been guaranteed roughly two-thirds of the vote in every election since 1994.

South Africa’s current president, Jacob Zuma, is a case in point: a charismatic leader who promotes himself as a champion of the poor and oppressed, but has been beset by scandals moral and financial. In the past few years alone, Zuma has been accused of corruption in a multi-billion dollar arms deal; charged with (and later acquitted of) the rape of a young family friend; and spent millions in public funds on improving his private home, including building an amphitheatre and swimming pool for “security reasons”. Zuma is one of life’s great survivors but now, with South Africa’s currency in freefall and unemployment hovering over 25%, his competency is openly questioned. 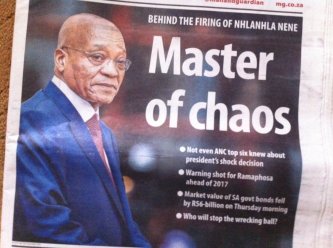 Over a breakfast of bacon and eggs in Newtown, I read a newspaper headline announcing that Zuma had abruptly fired his respected finance minister, after the minister reportedly refused to bail out an airline run by an ANC ally. Returning to the same café a few days later, I saw that the same newspaper headline had been recycled: the replacement minister had also been sacked, and the government had its third finance minister in less than a week. In such times, it’s easy to see why people are pessimistic about the future.

With a day to spare, I headed out of Johannesburg towards Pretoria, the administrative centre of South Africa and historic heartland of the apartheid regime. To my surprise, the Gauwtrain (‘Gold Train’) linking the two cities was a delight: spotless, punctual and safe; sliding under the city centre and over miles of dusty green veld. Fellow passengers included a boisterous group of locals speculating about which ANC grandee will take the presidential reins when Zuma retires in 2019. Their favourite candidate was Cyril Ramaphosa; a freedom fighter turned tycoon who owns all of South Africa’s McDonald’s restaurants, and has been accused of inciting brutal crackdowns on striking mineworkers. If great leaders are judged by how well they prepare their successors, then Nelson Mandela may be a less successful leader than his reputation would suggest.

The centre of Pretoria is dominated by Church Square, another strangely European zone of old brick buildings, including the ironically-named Palace of Justice where Mandela was sentenced to life imprisonment. At the centre of the square stands a top-hatted statue of Paul Kruger, who led the white settler farmers of the Transvaal Republic in their fight against British rule. A few months ago, protestors throughout the country began calling for such statues to be removed or renamed, offended by what they see as the continued celebration of the architects of white minority rule. Pretoria’s Kruger statue had been defaced with splashes of green paint, after which pro-Kruger protesters marched with signs reading “Ons gaan nergens”; “We’re not going anywhere.” Today, the old man stands ringed by a thick necklace of barbed wire for his own protection.

Heading out of town, I ascended the hot tarmac to the Voortrekker monument; a vast red-brick structure which hulked on a grassy hilltop like a bell-shaped heap of Lego. Unveiled in 1949, the structure commemorates the Afrikaners who trekked north in the 1800s in search of new lands, establishing the states which later formed the basis of modern South Africa. Unsurprisingly, this monument has also attracted the interest of protestors, thanks to its unabashed celebration of incidents like the Battle of Blood River, at which some 500 whites defeated around 12,000 Zulus. Today, though, all was quiet. The monument stood still and gloomy in the sunlight, its church-like interior lined with paintings showing white settlers delivering “civilisation” to black Africans through the barrels of their rifles.

On the steps outside the monument, I was surprised to find a pair of white South African newlyweds posing happily for wedding-day photos. The blushing bride laughed gaily as her pinkish dress ruffled in the breeze, while the groom’s friends seemed to fit perfectly the old Afrikaner stereotype: powerfully-built, square and sunburnt, with reddish beards protruding from under straw hats. The group were all aged under 30, but the scene offered a glimpse of a South Africa from another era: burly Afrikaners celebrating in front of a totem of white minority rule, as a bemused black security guard looked on. As the sun set, I felt that I’d travelled back in time again.