With apologies to readers who aren’t that interested in politics, a few random thoughts on the draft deal announced this week between the UK and the EU:

1). Mind the gap. One of David Cameron’s greatest triumphs in more than ten years as leader of the Conservatives has been to drag his party into the modern age; narrowing the gap between party policy and public opinion on issues such as the National Health Service, climate change, gay rights and maternity leave. On Europe, though, this shift hasn’t happened: there’s still a huge gap between what many Conservative MPs and party members think about the EU and what the average voter believes. To many of the people who join local Conservative Associations or attend MPs’ Christmas drinks parties, Europe is the most important political issue of the day; a source of endless frustration and disappointment. To most ordinary voters, however, Europe sits way down their list of priorities, far behind things like jobs, the economy, healthcare and schools. In places like the Netherlands and Belgium, both the advantages and disadvantages of EU membership are fairly obvious: people drive across fenceless borders daily to shop or work, without using passports or changing money. But for Brits, living on an island with their own currency, the Union is far more abstract: something which hovers unnoticed high above their day-to-day lives. All this means that the new deal is one which – as a Bloomberg news headline put it this week – “British Voters Might Not Even Notice”. At the time when Cameron pledged a referendum on EU membership, it may have seemed like a necessary step to kill off UKIP and secure his re-election. Now, it seems like a pointless indulgence; gambling with national security in order to pacify a small minority of Conservatives who might otherwise tire of his husky-hugging ways.

2). Great expectations. In that context, the details of the draft agreement Cameron has reached matter far less than the public’s general impression of it. Sensible people won’t spend their evenings reading the fine print of the new reform plan, but will notice that most newspapers and broadcasters think Britain is getting a bad deal, and will decide how to vote in the referendum accordingly. In this respect, Cameron is in a bit of trouble: having won an election pledging to transform Britain’s relationship with Europe and slash immigration and regulation, he’s now unveiled a draft deal which only tinkers with the status quo, and depends heavily on him winning permission from the very institutions which he claims to be fighting. In the Prime Minister’s defence, it’s impossible to reach a deal which would be agreed by the other member states and keep right-wing Eurosceptics happy, but expectations need to be managed carefully. Cameron blundered by giving the impression that change would be revolutionary rather than evolutionary. 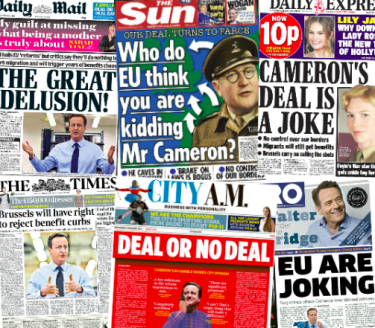 3). Risky business. Despite all that, the ‘Britain Stronger in Europe’ campaign is likely to win the referendum, despite the unfortunate acronym. This is primarily because most people are fundamentally risk averse, and unwilling to gamble on major changes if there’s a chance they might threaten their economic security. Both the recent Scottish independence campaign and the UK general election last year are cases in point – after months of analysis and debate, voters ignored the tug of their heartstrings and took the safest option. This reality ties in nicely to one of Cameron’s strongest suits as a leader: that even people who deeply dislike him often think he’s competent, crafty and ruthless enough to protect their interests in a time of uncertainty. If Cameron can make a strong case that leaving Europe would damage Britain’s economic competitiveness and put jobs at risk, most voters will be unwilling to risk change. At a time when the economy seems to be healing, why gamble on an uncertain future?

4). Easy rider. The prospects of the pro-Europe campaign are also helped by the fact that Cameron is getting a pretty easy ride. The opposition Labour Party is deeply divided over foreign policy, while the Brexit campaign still hasn’t found a likeable household name to act as its figurehead. Despite some harsh headlines, the media are also playing gently so far. Labour leader Jeremy Corbyn was ridiculed over his party’s splits on whether to bomb Syria, while Cameron can breezily admit that many of his own Cabinet disagree with him. If Corbyn had proposed a similar deal to that which Cameron announced this week, the press reaction would be far harsher. Cameron has a reputation for being lucky in his opponents, and this is no exception.

5). Contagion. Other countries will be watching the British renegotiation process carefully – not just because they would prefer the UK didn’t leave the EU, but because a British vote to quit would fan the flames of nationalism in their own countries. The Netherlands, for example, famously voted ‘No’ to the European Constitution in 2005 but since then has developed a begrudging affection for the EU. Most Dutch people recognise that a tiny country with an open economy can do better as a member of club than it could on its own. However, many Dutch are also increasingly unhappy about the laxity of immigration rules and the cost of bailing out other countries which have been less careful with their money. Prime Minister Mark Rutte is traditionally a strong ally of Cameron’s, but his support has become increasingly erratic of late. If the British voted to leave the EU, pressure to hold a similar referendum in the Netherlands and elsewhere would probably become unstoppable.

5). Crowded house. It’s also interesting to note the emergence of a new split within Europe. On economic issues like the Greek bailout, there’s long been a (simplistic but largely accurate) divide between the north and south of the continent, with the pro-austerity Germans, Dutch and British facing off against the more spendthrift Greeks, Portuguese, Spaniards and Italians. In the Brexit debate, there now seems to be a new divide emerging, between the western countries which traditionally import labour and the eastern ones which export it. Cameron’s demand that migrants from other EU countries shouldn’t be able to claim benefits seems fairly reasonable to many British, Dutch or German ears, but is hugely controversial south and east of Berlin. It’s significant that the European Council President negotiating with Cameron, Donald Tusk, comes from Poland, one of the countries which sends the most migrant workers to the UK. It’s also no coincidence that one of Cameron’s first trips to sell his EU reform deal will be to Warsaw. During last year’s ‘Grexit’ crisis, shuttle diplomacy centred on Brussels, Berlin, Paris. In this year’s ‘Brexit’ crisis, the hotspots may well be Riga, Vilnius and Tallinn.

6). The gambler. David Cameron has already become so closely identified with the draft reform deal that it will be hard to survive as Prime Minister if the country votes against it. However, in nearly six years in power he’s acquired a habit of making bold gambles which somehow end up paying off: on forming a coalition government, on the Alternative Vote referendum, on letting Parliament vote on Syrian airstrikes, on Scottish independence. Europhiles can only hope his luck won’t run out this time.

One thought on “Tories, Poles and Reckless Gambles: some points on the UK and Europe”