Mwandama is no ordinary Malawian village. I’d visited dozens, perhaps hundreds, of small villages scattered across the country, and while the locations and the languages spoken varied, the sights were almost always the same: bad roads, bare maize fields, leaky little huts and dozens of hungry children. The people were invariably kind and welcoming, and the surrounding countryside was often beautiful, but I always found it a depressing, millenarian scene. 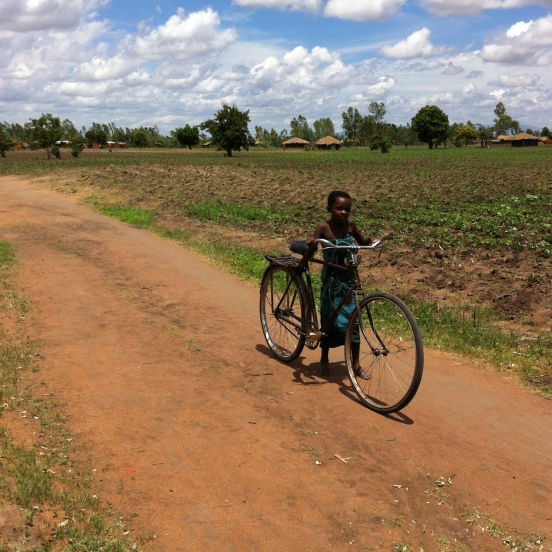 In Mwandama, though, things were rather different. When I visited a few months ago, the main road leading to the village was a dirt track, but a reasonably smooth one, with few wheel-swallowing potholes. At the edge of the village stood a shiny tap with a concrete basin underneath, and a bleach dispenser for purifying water. Every house had glass windows and smooth cement walls which were robust enough to stand years of heavy rains without collapsing. At the village centre, a cluster of neat brick buildings encircled a small open space; each with a rainproof corrugated roof and neatly whitewashed walls. One, I learned, was the school; another a community Grain Bank to help farmers store their crops safely and sell them when maize prices peaked. Across the way was an immaculate health clinic, with smooth brick-and-concrete benches and posters encouraging visitors to wash their hands, vaccinate their children and take free HIV tests. The children hanging around outside the health clinic looked poor, but well-nourished and (by rural Malawian standards) well-off. A few of them even had shoes.

A brief examination of the health clinic soon revealed what made Mandwama different from other villages: it was, as the stickers above the door said: A MILLENNIUM VILLAGE – one of fourteen established throughout Africa to act as showpieces for the Millennium Villages Project (MVP), a programme which aims to improve access to services like education and healthcare, and in the process demonstrate how poor rural communities can be thrust into the modern age. The UN Secretary General, visiting Mwandama in 2005, described it as no less than “a model” for how to “do” development in Africa.

The Millennium Villages scheme is the brainchild of Jeffrey Sachs, a celebrity economist and professional world-saver who’s probably the most influential champion of the idea that countries like Malawi are stuck in a “poverty trap” from which they can only escape via a “big push” of cash and expertise provided by rich foreign donors. The MVP is the embodiment of these beliefs: a trial which aims to prove “aid works” and provide a roadmap for the development of the rest of Africa. However, more than fifteen years after the scheme was launched, the evidence in favour of it is decidedly mixed. Supporters (including Sachs himself) point to evidence showing that in most Millennium Villages, incomes have risen, malaria prevalence plummeted, and access to clean drinking water increased sharply. In the village I visited, the MVP claims that crop yields have increased more than fivefold, that access to improved drinking water has doubled, and that every child has been immunised against measles. Visiting in 2010, UN Secretary General Ban Ki-Moon claimed that “the vast majority” of families in Mwandama had enough food, and every household had an anti-malarial bednet, and many more girls were attending school.  “People’s lives are far better”, he said.

Others, though, claim that the MVP is a classic example of a lavish scheme which makes donors feel good, and creates nice photo opportunities for people like Ban Ki-Moon, but does little to bring about lasting change. Perhaps the most high-profile critic is William Easterly; a mild-mannered, grey-bearded Professor of Economics at New York University who argues that Sachs and his ilk are “resoundingly right about the tragedy of world poverty”, but have a dangerous habit of proposing absurd solutions; “large-scale crash programs” which are modern-day versions of Mao’s Great Leap Forward, dreamt up by unaccountable outsiders and rooted in a neo-colonial “arrogance that ‘we’ know exactly how to fix ‘them’”. Others, argue that the Millennium Villages’ gleaming health clinics and new school buildings are nice to have, but that similar results could be achieved for much less money – the MVP typically invests about $120 per villager per year, an extraordinary amount in places where the government’s entire health budget might amount to $25 per person per year. The debate continues, but as the Economist once noted, “for something designed to improve lives in some of the poorest parts of the world, the Millennium Villages Project certainly stirs up a lot of bad blood”.

Wandering around Mwandama, I was surprised to find myself agreeing with the critics. It was clear that some of the infrastructure which had been built represented a great achievement, but – months after the original 2015 deadline for “solving” poverty in the Millennium Villages had passed – a lot of it still seemed half-finished. One woman I spoke to was proud to show me the neat little house which the MVP had built her, but quick to point out that it didn’t include a bathroom. “I have to go to the toilet at the clinic”, she said “and so do all my neighbours. It gets very dirty sometimes. Even the health workers have to go and wash their hands in this toilet building, when it is dirty, and then go back to treat the patients with their dirty hands. That is not good”. Weirdly, at mid-morning on a weekday, the whole village was practically deserted. The men may have been working in the fields, but there were no children in the school, and neither staff nor patients at the shiny health clinic. The Grain Bank looked empty. At the school, the first classroom I looked in was far nicer than most others I’d seen in Malawi, but the next was completely bare. Another contained only two things: an upturned green plastic bucket and what looked like a dead chicken. 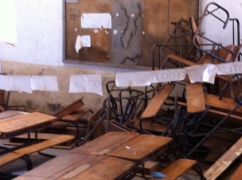 The fourth classroom was filled with a mighty jumble of broken, unused desks, which looked as if they had been dumped there by a passing hurricane.
As I peered inside, a boy of about eight ran up behind me, curious and slightly scared of the visiting white man. “Do you go to school here? Do you like it?” I asked. “No school!” he grinned, turning and running away across the red dust of the playing field.

I walked the short distance back to the health clinic, and began nosily peeking through windows and trying doors there. To my  embarrassment, one of the doors which I tried opened, and woman of about my age strode out, introducing herself as a nurse. I asked a few questions about the illnesses she treated, and she recounted a familiar litany of ailments: malaria, pregnancy problems, diarrhea, child malnutrition. But, she said, health problems were less severe than in other places where she’d worked; here in Mwandama, most people at least had enough to eat, and access to clean water. “People here are quite lucky”, she said. I asked whether things had changed much in the last few months, since the Malawian government took over from the foreign advisers who had been running the services in the village. The nurse’s answer was disappointingly predictable: “The clinic is very nice, but the big problem is that we have no drugs. The Millennium people used to send us deliveries, and we had most of what we needed for the patients. But the government took over a few months ago, and since then the deliveries never come. We have no antibiotics and no painkillers. There are no malaria drugs left. If people get sick, we have to try and send them to the nurse in Zomba – but there is no ambulance”. The nurse paused to answer a phone call, and I took the opportunity to flick though my notebook. In it was a quote which I’d copied from one of Jeffrey Sachs’s books, written a few years previously, when the Millennium Villages were just getting started. “In the past”, Sachs had written, “donors often helped countries to build clinics, but then rejected the plea to help cover the salaries of nurses and nurses to help staff the clinics. The predictable result has been the construction of empty shells rather than operating health facilities”.

With impeccable timing, the nurse was interrupted by the arrival of a patient: a slight woman of about twenty-five, with close-cropped hair and tatty purple dress; held up between two friends with her eyes rolled back in her head. One of the two women explained the situation to the nurse, and she quickly translated for my benefit: the sick woman had given birth a few days previously, and had been growing weaker and weaker ever since. She would probably die if she didn’t get a blood transfusion and medication soon, neither of which were available in the “world-class” Millennium Villages clinic. “We can call her an ambulance to go to Zomba, but it will take maybe half a day to get here, depending on whether the driver can find enough fuel. Here, we can do nothing for her.”

I went and fetched my car, and drove back to the

clinic, where the patient was loaded carefully into the back seat. With her moaning behind me, I drove off as quickly as I dared, bouncing along the dirt road to Zomba, leaving the empty Potemkin village behind. As Professor Stanley Hoffman wrote during the Vietnam War, the road to hell is often paved with good intentions.