The trouble with the Netherlands and Turkey

Two days ago, the Dutch election campaign seemed to have all but run its course. Some still feared a surprise upset, but overall a strange sense of calm had descended: with Prime Minister Mark Rutte rising in the polls, and the populist Geert Wilders sinking, politics had ceased to be front-page news. This weekend, however, saw a series of dramatic upsets: crowds rioting in Rotterdam, foreign politicians deported, and the Dutch government both accused of trampling on human rights and praised for defending them.

As has been widely reported, the trouble was sparked when the Dutch government, citing security concerns, blocked an attempt by the Turkish Foreign Minister to hold a rally in Rotterdam,

as part of a campaign to strengthen the powers of the already-authoritarian President Recep Tayyip Erdogan. What should have been a minor diplomatic squabble over the cancelled event quickly spiralled out of control, with the Turkish government threatening to impose sanctions, the Turkish Foreign Minister saying the Netherlands was the “capital of fascism” and Erdogan himself saying the Dutch were “Nazi remnants”. When the Turkish Foreign Minister’s plane was refused permission to land in the Netherlands another Turkish minister tried to travel overland to Rotterdam from Germany, but had her convoy stopped by Dutch police at a petrol station, and was forced to drive back over the border. By Saturday evening, President Erdogan’s supporters were protesting violently outside the Turkish consulate in Rotterdam. Crowds of mostly young men threw bottles and rocks at police, who pushed back with baton charges, dogs and water cannon. Twelve people reportedly were arrested and seven injured. Amid the broken bottles and hurled bricks, an election which had started to look like a foregone conclusion suddenly looked anything but.

Ties between the Netherlands and Turkey have always been unusually close, thanks in part to the large number of Turks who live in cities like Rotterdam. Turkish immigrants began to arrive in the country in significant numbers in the late 1960s and 1970s. The Netherlands’ post-war economic boom created a demand for labour that the local population could not meet, and the Dutch government responded by encouraging the recruitment of so-called ‘guest workers’ from lower-income countries on the fringes of Europe, including Morocco and Turkey.
Thousands came to work in Dutch dockyards, factories and building sites; living in cheap boarding houses, working hard, saving harder and making long car journeys to visit their home countries each summer. The government assumed that the ‘guest workers’ would be exactly that – guests who came on a short-term basis – but it quickly became clear that many planned to stay permanently. 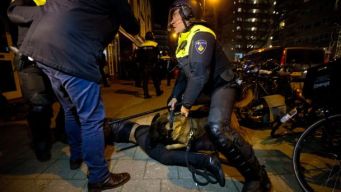 By 2016, the Netherlands – a country of fewer than seventeen million people – was home to 400,000 people of Turkish descent, including around 40,000 in Rotterdam alone. Despite the Dutch government’s introduction of tougher immigration rules, the Turkish population continued to grow over time – between 2000 and 2015, the number of Turks living in the Netherlands increased by 27 per cent.

The conventional wisdom in the Netherlands is that the country’s Turkish immigrants are a modest success story: relatively well-integrated, with educational attainment and unemployment rates which compare favourably with other ethnic groups. In cities like Rotterdam many successful businesses are run by Dutch-Turkish entrepreneurs, and there’s even a national political party (‘Denk’) lead by two Turkish MPs. Statistically, Turks in the Netherlands are socioeconomically better off than other minorities, and less likely to commit or be suspected of crimes. Promisingly, the employment rate of second-generation Turks (that is, children of immigrants from Turkey) is higher than that of the first generation, suggesting integration is improving over time. In less politically-correct circles, it’s common to hear stark comparisons being made between Dutch Turks and Dutch Moroccans: around Rotterdam, the crude racial stereotype says that Turks are educated, secular, socially liberal and hard-working, while Moroccans are said to be lazier and more inclined to commit crimes and hold hard-line Islamic views. Geert Wilders regularly speaks out against Turkish membership of the EU, but it’s probably no coincidence that when his language turns darker and he starts threatening mass deportations, he’s usually talking about Moroccans rather than Turks.

Of course, between the crass stereotypes there are many shades of grey – Moroccans who are well-integrated and successful, Turks who are more devout than their Moroccan neighbours, and Dutch Muslims who believe strongly in gender equality, freedom of speech and the right to enjoy a glass or six of Heineken. However, it’s also fair to say that the Dutch Turkish community is not without its problems. Unemployment among Turks in the Netherlands nearly doubled between 2002 and 2012, and Turks are roughly three times as likely to be criminal suspects than the native Dutch. Turkish girls in particular lag far behind their Dutch peers at school; and nearly a quarter of young Turkish and Moroccan men are what the British would call ‘NEET’ – not in education, employment or training. Turkish people in the Netherlands are also perhaps not as well integrated as some statistics imply – compared with other minorities like Antilleans and Surinamese, Turks are less likely to marry Dutch citizens and more likely to marry within their own communities. In the book which I wrote about the Netherlands, I wrote of my own surprise at how common it was in Rotterdam to meet Turks who had lived in the Netherlands for years but spoke little or no Dutch, and fraternised only within their own communities. According to one Dutch government review of differences between ethnic groups in the Netherlands: “Turks have the strongest focus on their own group. Turks often feel especially Turkish, have fewer contacts outside their own group, often use media from the country of origin and have little interest in Dutch politics.” Compared to other minorities, the Dutch Turks’ troubles may be slight, but their integration in Rotterdam is also not quite as smooth as some cheerleaders claim. A city which initially looks like a proverbial melting pot of ethnicities often turns out to be more like the baklava sold in local shops: lots of colourful layers which sit neatly side by side but never mix.

Recent years have also seen emergence of some troubling tensions between the Dutch authorities and parts of the Turkish community. Dutch politicians’ hard-line rhetoric on immigration and Islam has understandably offended many migrants, while the rise of more conservative strains of Islam within Turkish politics has coloured relations between the two countries. In 2013, for example, Erdogan strongly objected to the adoption of a Turkish child by a lesbian Dutch couple, accusing the Dutch state of mistreating the child by exposing him to homosexual influences. More recently, the Dutch and Turks have diverged over whether to support Kurdish fighters in the battle against Islamic State, and a deal whereby the Turks effectively agreed to control the flow of refugees into Europe has 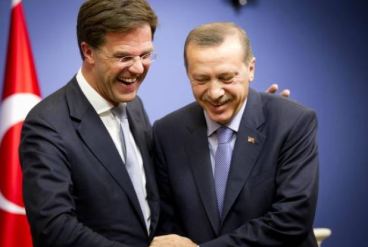 begun looking increasingly shaky.
As Erdogan jails opponents, detains journalists and centralises power, the Netherlands finds itself increasingly at odds with its former ally. The Turkish government long prided itself on its ability to act as a moderate ‘bridge’ between the Middle East and Europe, but the recent change in tone has been striking. Last week, for example, a delegation of American journalists visiting Ankara were treated to a mayoral presentation claiming that the U.S. and Israel had colluded to artificially trigger an earthquake in Turkey so that they could capture energy from within the fault line. A Turkish minister tweeted yesterday that her country was demonstrating what “a true democracy” looks like, but the truth is that President Erdogan is rapidly turning into the Vladimir Putin of the Middle East; a corrupt ‘big man’ who tolerates no dissent.

Within the Netherlands, the big question is of course what impact the latest dispute will have on the election. As Prime Minister, Mark Rutte has faced a delicate balancing act this weekend – trying to stand up for his country without destroying the unity of NATO, and trying to appease right-wing critics without alienating left-leaning voters. As the spat intensified, Rutte pledged to do whatever he could to “de-escalate” tensions, but the fear of losing votes to Wilders has been evident in his populist rhetoric. “The Netherlands”, Rutte said after Turkey threatened sanctions, “is a proud nation. We can never do business under those sorts of threats and blackmail”. Asked later if he’d apologise to the Turks, Rutte replied: “Are you nuts?”

A cynic might think that a dispute with a Muslim country was just what Rutte needed right now: a perfect opportunity to demonstrate that he’s willing to take a tough stance in defence of Dutch values. Most centrist commentators agree that Rutte has made the best of a bad situation, but among people who tweet angrily about such things, opinion is more divided: some say the Prime Minister shamefully trampled on cherished Dutch principles of free speech, while others say the whole saga proves that the Netherlands is at war with Islam and that Rutte’s centrist policies have failed. In a messy, fragmented election, it’s difficult to map what the overall impact will be. Will moderate Turks who disliked Rutte’s immigration policies now back him because he fought with Erdogan? Or will pro-Erdogan Turks vote strategically to force Rutte from office? Will centrist voters shocked by violence in the streets take a second look at liberal, left-leaning parties who preach a softer line on immigration? Or will floating centrists decide that enough is enough, and the Netherlands’ tolerant attitude to immigration and Islam has gone too far?

No-one really knows, but it’s safe to assume that news footage of angry young Muslim men fighting with police is helpful to Wilders. Predictably, the blonde bombshell has been quick to do his best to make a bad situation worse, tweeting that “all Turks in the Netherlands who agree with Erdogan” should “go to Turkey and never come back.”

Yesterday, as police maintained a defensive line around the Turkish consulate in Rotterdam and pro-Erdogan stickers were chiselled from tram stops, a small plane was seen circling overhead, trailing a long banner encouraging locals to vote for Wilders’ party.
Like the banner, the dispute over the cancelled visit will likely blow over, but it’s hard not to see the broken bottles and toxic talk as yet another sign that the Netherlands is not quite the island of tolerance and tranquillity that it used to be.